Home › Opinions › Columns › Satire: Why the Oxford Comma is Racist

Satire: Why the Oxford Comma is Racist 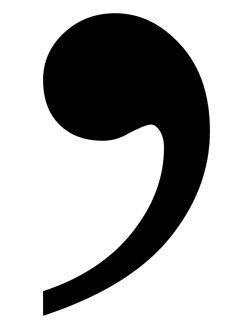 The Oxford comma is a fiercely debated grammar rule that has split writers, scholars and readers alike. Most people in favor of the oxford comma see it as an effective way to clarify sentences that use lists with more than two subjects in it. Those that oppose the comma align themselves with the Associated Press style guide and the journalists who praise its name. All will bow before its might or suffer the wrath of journalistic obscurity. However, the reason the Oxford comma should be forever banished isn’t just because the AP style guide demands it, praise be unto it, but because the Oxford comma has a deep rooted history with racism and bigotry.

Prior to 1936, before the Oxford comma, all lists were written only in sets of two. Any lists that contained more than two subjects would have to be written in multiple sentences such as “Go down to the corner store and buy eggs and milk. Also buy some yogurt and butter. Also buy some carrots and chewing gum.” This caused paper prices to skyrocket as well as making clerical work all the more tedious.

However, this all changed in 1936 when Herman Feurd, a German Ox farmer and professor of English literature, found himself in a heated argument with his wife after accidentally commenting on her weight in a letter to a friend in a neighboring village. He wrote “I’m concerned, my dear Hanz, for what would happen if they were to catch us. Our love must always remain a secret. But, nonetheless, I must tend to the oxen, my wife and my children.” Embarrassed, Herman Feurd then created the OxFeurd comma so that nobody would ever have to feel the scorn of this grammatical confusion again.

Interestingly, though, Feurd’s new contribution to grammar caught the attention of a recently elected Fuhrer, Adolf Hitler. Hitler sought to create a more efficient Germany to power his war machine. In order to do this, he created the Oxfeurd Act which officially made Herman Feurd’s new grammar rule a grammar law. All lists with more than two subject would require a comma before the and of the last subject.

Thus, the Oxfeurd comma reigned supreme, Adolf Hitler created a new battalion of wehrmacht who had the sole mission of correcting grammar mistakes within the third reich and punishing anyone with subpar grammar. Yes, actual grammar nazis, that is where the term comes from. Over ten thousand grammar based killings took place within the city of Berlin. Oh also like six million non grammar related killings throughout the rest of Europe.

Now if the Oxford comma has such a dark history, why is it still held as the standard for the English language? Snake people. Slithery, slimy, hissing snakes in the skins of former humans. They’re out there. Always plotting, watching, taking power, plotting, hissing, correcting my grammar and plotting.

I’ve noticed it, the way my English professors draw lines all over my papers when I turn them in that resemble snakes. Edit marks or glyphs of a reptilian society? This secret society of grammar nazi snakes that want to implement the Oxford comma are a very real thing. They seek out those who use the oxford comma, brainwash them, steal their skins and initiate them into their order.