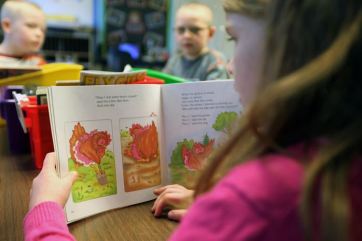 According to a the 2017 National Assessment of Educational Progress, North Carolina students have made little progress on reading compared to the amount of money being invested into boosting elementary students’ skills over the past six years.

The state program, Read to Achieve, was enacted in 2012 as part of Sen. Phil Berger’s Excellent Public Schools Act. Read to Achieve was ultimately designed to ensure that all students were at the same reading level by the end of the third grade; if a student does not meet the benchmark, the law requires them to be held back from fourth grade. According to Drew Elliott, head of communications for the North Carolina Department of Public Instruction who spoke to the Charlotte Observer, North Carolina has spent $151.7 million on the program since 2012.  This has mostly been in the form of digital services for elementary schools, as well as summer camps to give extra reading practice to students who need it.

According to the report, 39 percent of North Carolina fourth-graders and 33 percent of eighth-graders were rated proficient in reading. The progress over the years has plateaued, even with the $57 million invested into Read to Achieve for the 2016-2017 school year.

Despite the lack of reading growth in elementary schools, the high school graduation rate has grown to a record 86.5 percent, and 73.7 percent of schools are meeting growth rates on state tests.

“The graduation rate is at an all time high but it is continuing to grow at an incremental rate. A stubborn concern is that, still, 26 percent of schools in North Carolina do not meet growth. And that is where it is really going to take innovation and innovative practices to address that stubborn concern,” said State Superintendent Mark Johnson.

“Teachers in North Carolina are working hard, and our state has made strong investments in early grades,” said Johnson. “While it is frustrating for educators and state leaders to see incremental progress instead of general success, we have spearheaded efforts to ensure that all funds invested by our state actually benefit teachers and students.”

Tracey Wolf, a third grade teacher at Bluford STEM Academy in Guilford County, described the struggles of being in a system that repeatedly tracks student performance.

“Constantly having to have data on student performance means constantly giving assessments. We have been told repeatedly ‘don’t teach to the test’ and to teach the students the skills instead. However, when we constantly have assessments due, growth required for school performance and pressure to do well on End of Grade testing, we have to teach to the test so the students have a chance,” said Wolf.

Guilford County Schools adopted the American Reading Company program last year, which provides grade levels with four different nine week units for the year that hit different standards and skills required for the students. Guilford County also implements Read to Achieve curriculum by doing scheduled testing throughout the year. Wolf’s students are required to take Beginning, Middle and End of Year testing, and End of Grade testing and benchmarks tests along the way to determine if students stack up to the standards of where they need to be by the end of the year.

According to Wolf, her class takes weekly assessments in order to prepare for all the exams, which takes away several classroom instructional opportunities.

“In my opinion, having the data to show student growth is important for teachers to have. However, it seems those scores are being held against the schools, which puts pressure on schools and teachers, which makes the teachers feel they do need to teach to the test,” said Wolf. “There is an understandable need for growth each year, but holding schools accountable for this has shifted the importance of testing from benefit of the students to stress to meet growth requirements—especially for lower performing schools.”