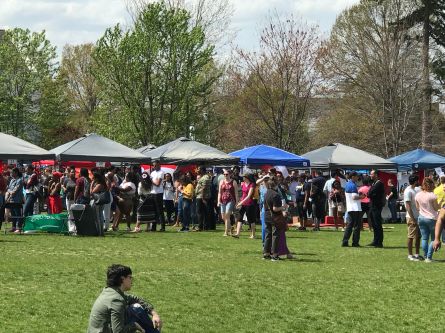 Imagine the movie “Around the World in 80 Days” in a wide-open field, and you have the 36th annual International Festival that covered the entirety of UNCG’s Elliott University Center lawn. The festival brought the local Greensboro community and UNCG students together for an afternoon of multicultural fun.

The Stateside Student Organization was created in 2009 by a collective of students at UNCG who wanted to help other students study abroad. The organization was created as a way for prospective study abroad applicants to hear first-hand experience from students who studied abroad in years previous. These students share their stories to help students in the process of leaving the country to feel more comfortable traveling.

The International Festival featured over 50 booths, providing attendants the opportunity to browse local Greensboro shops, food and various fun activities to win prizes. One activity offered was the called Passport. The Passport was a small booklet with numerous countries that festival attendants could get an individual sticker for after visiting a booth represented by a country. Once this passport was complete, it entered the person into a raffle to win UNCG memorabilia from the festival. The festival held performances from various student organizations, such as the dance troupe, Jawal and fun games from the Chinese Student Association.

The Chinese Student Association brought two students from the audience to play a game called Guess What’s In The Box. The players placed their hands in a box and had to guess what was inside of it; two of the objects in the box were a squid and tofu. The game brought many laughs and was an enjoyable activity among performances of native dances from Peru and songs of love from Mexico.

While in the audience, I met two students from UNCG. One of them was Mia Hester, a sophomore. When asked if she felt like she has learned about culture other than her own from attending this event, Hester said, “I have learned about what makes UNCG such a great place for diversity, and this event offered a wealth of knowledge I didn’t have previously.” Her friend, Natalie Pagan, is a junior at the university, and upon being asked if she felt more of a connection with the students on campus, she said, “I feel that I have more insight on the various people that live on this campus, and I have a deeper appreciation of the students who live here.”

As they walked away I looked at the various activities that were going on at the festival such as henna tattoos, various games of chance and games to win prizes. The festival also offered food from a variety of cultures for all to enjoy. As I was about leave the event, I met with UNCG sophomore, Cristian James, who said that from the festival, he learned, “that the country of Sudan has more pyramids than Egypt, and I found this very interesting.”

The International Festival offered students and the Greensboro community a multicultural experience with a variety of different foods, games and performances.

Like Loading...
‹ UNCG Clothing drive for LGBTQ+ Youth
Report shows effect of ‘Read to Achieve’ in schools across North Carolina ›