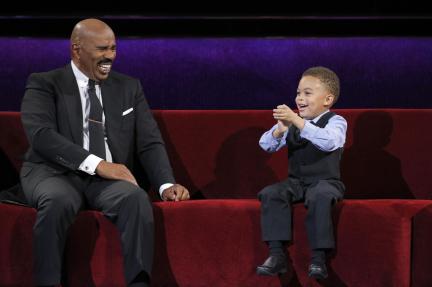 Little Big Shots, an NBC television show hosted by Steve Harvey, which premiered in March 2016 features an array of incredible children from around the world. From child singers to dancers to athletes and more, Little Big Shots shows how amazing children can be.

The NBC show, which was once nominated for Outstanding Reality Program/Reality Competition Series at the NAACP Image Awards, is co-created and produced by Harvey and Ellen DeGeneres. The show also has adaptations in other countries such as the UK, the Philippines and Australia.

The show involves the showcasing of talented children who not only show off their skills but partake in humorous conversations with Harvey himself. One of the talents on the show hails from our very own city of Greensboro, NC.

Six-year-old Caleb Serrano, who first premiered on Little Big Shots a year ago, is a sensational worship singer whose forte is gospel music.

Caleb first became a social media sensation three years ago when a video surfaced online of him singing, “This Little Light of Mine” at church. Since then, Caleb has been on Little Big Shots, Harry Connick Jr’s talk show, The 700 Club and has even performed on stage at Joyfest 2017.

Caleb, who is a praise and worship leader at Ebenezer Baptist Church on W Vandalia Rd in Greensboro, answered “God” when asked what is his favorite part about leading worship. When speaking with him, his bubbly personality and confidence stood out.

With so much confidence, it bares the question of whether there is stage fright hiding underneath it all. “That’s a question that everybody asks me, I always give them the same answer- no,” said Caleb. This confidence has thus far landed him justly in the spotlight.

Caleb’s father, Richard Serrano, said of his son’s success that he never expected it to get as big as it did. “Caleb… has always had these gifts and talents. [For] me and his mom it became a normalcy around the house. We weren’t looking or aspiring for Caleb to be a gospel artist by no means, but it just kind of led that way.”

When asked of the community reaction in Greensboro, Serrano said it has been a “great experience.” He spoke of how they have had the opportunity to serve the community, especially after the tornado that touched down in Greensboro on April 15, 2018. “We were able to go out and deliver hot plates from door-to-door,” said Serrano.

Not only have Caleb and his family been able to help throughout Greensboro’s tornado, Serrano explained how they have also been able to shed light to other issues in Greensboro’s community. “We had some great opportunities to partner with our local United Way to help bring awareness to generational poverty in the city.” In other words, this little singer is remarkable when it comes to giving back to his community. His gift of singing has blessed all those around him.

Caleb was featured again on Little Big Shots this past Thursday on June 14 where he wonderfully performed the upbeat gospel hymnal “It’s Alright, It’s Okay.”

You can catch more new episodes this summer of Little Big Shots on NBC on Thursdays at 8 p.m. ET or visit https://www.nbc.com/little-big-shots.