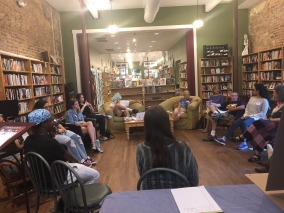 “Close your eyes and imagine the environment you grew up in, hear the sounds, smell the aromas, really feel what it was like,” prompted Kathe Latham to the Sierra Club Ready for 100. Many people began with tales of running, hiking and climbing trees, but UNCG Alum Martrez Gay spun a tale of wide-open, litter-free fields and crisp, breathable air a mere two hours away from Greensboro. He had slowly gotten used to the stark inner-city after moving to the heart of Greensboro after graduation. After his story, he was met with nostalgic nods and support. The primary question that lingered was, “What steps can be taken to create a more livable and equitable Greensboro community?”

The Sierra Club Piedmont Plateau Group’s Ready for 100 campaign calls for Greensboro to have 100 percent clean energy by 2050, and on Thursday, Oct. 4 at 5:30 p.m., they hosted a ‘Green Drinks’ event at Scuppernong Books on Elm Street. The primary topic of discussion was prioritizing environmental and ecological justice in Greensboro. The people at the table were wonderfully diversified, ranging from current UNCG environmental and sustainability majors to representatives of Vegans for Peace and Democracy Greensboro.

Even Scuppernong Books, allowing the event to be hosted within their location, exemplifies the definition of “green” Greensboro businesses.

Latham facilitated the conversation that really honed in on what people are interested in for the future of Greensboro.  People learned and discussed that their buying power, as well as their voting power, certainly had the power to affect change in any industry they cared about. Also, with proper marketing of the environmental and ecological issues, UNCG and the greater Greensboro can band together and really advance new causes.

The Sierra Club Piedmont Plateau Group’s Ready for 100 campaign plans to host a plethora of October and November events that can be found on their Facebook page, ‘Sierra Club Ready for 100 Greensboro,’ with a goal of moving towards action planning and the creation of a task force dedicated to the 100 percent energy transition. This leaves the question, what part of Greensboro’s iconic history will UNCG students be a part of?