Indie Musician Redefining ‘Made in China’ with New Distribution Tactics 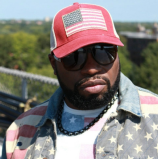 For an aspiring musician, sitting down with a rapper who signed with a Def Jam label is an opportunity. The fact that he went on to start his own record label, and is focusing on passing on his knowledge to younger musicians is just icing on the cake.

It’s likely you haven’t heard of D.V. Alias Khryst – he’ll say so himself. He has, however, had significant success just out of the spotlight in the rap world.

“I’m a pretty humble dude, so I don’t assume anybody knows who I am,” said Khryst, “I’m kind of like a supreme clothing line, only the hipsters kinda really know.”

In the mid-‘90s, Khryst came onto the scene with Trigga the Gambler and Smoothe da Hustler. The three Brooklyn natives were thrust into a much bigger scene together through their label No Doubt (Def Jam). He’s worked with Notorious B.I.G., Dr. Dre, and many others.

However, Khryst’s label didn’t move forward with his projects with any real urgency, and now that he’s calling the shots, he finds more value in breaking new ground, even if it’s with an old medium.

“I have distributors who work with my digital, and I am also working with a company who normally only deals with DVDs – the music thing for them is new,” said Khryst.

He convinced a DVD supplier to distribute his latest album, meaning a new distribution channel opened up.

“I challenged them to distribute a CD, and the result now is that I’m getting exposure by being on sale at Best Buy, and Target, and Barnes and Noble next to Kendrick Lamar. I’m on my own, that kind of leverage is big for me.”

But Khryst is looking past physical albums – it’s not on the rise. While compact discs were once 95 percent of the massive music industry, it is now dwarfed by streaming income, which is about half of total music revenue. Again, when Khryst is trying to amplify is own work, he focuses on a non-traditional channel. In this case, the online Chinese rap scene.

“I been traveling the world for some years now – China’s a place that I never been,” said Khryst. “Watching them embrace the new music, even if it’s taboo, or forbidden, sometimes a risk for them to even enjoy.”

Khryst is on traditional streaming services in North America, but the massive Chinese market is a closed system: it has its own streaming and social media sites. They needed a different entry method to access those 750 million online music listeners.

“I hear through a friend there’s a way to get in now – online, with videos. After I set it up I’m foldin’ my arms: is this a B.S. lane to put things through, or is this the real China experience?” Khryst was referring to his Chinese digital distributor, Musicinfo.io. “I had four hundred views, next morning I have ten thousand. Next morning I have a hundred and ten thousand.”

Juri Kobayashi at Musicinfo says the demand is real – and a real opportunity for independent artists.

“China is kind of a closed culture, but the youth are very much a part of a huge movement to bring in new flavors, new sounds, and those are often in English.” Said Kobayashi.  “The good news is that nowadays, three out of five artists are independent artists in China. Not as much of a major label stranglehold there.”

Khryst picked a provider who allowed him to keep 100 percent of his royalties, and one who would promote his music in China, not just upload it and forget about it. For all of his projects, he stresses that outreach to his fan base is critical – that goes double for students, who may only have a handful of loyal fans.

“Not everybody can make music that speaks to the world – you have to say ‘okay I got this amount of people who always like my stuff,’ I don’t care if it’s ten people!” Said Khryst. “You gotta make those people feel special. Nicki Minaj did a great job of this, I watched her career go from where it wasn’t to where it is. She gave her fans their own name, she made them special.”

“I feel blessed to be puttin’ out hooks and singles. It’s a blessing – I feel blessed and humble. I am the quintessential hybrid artist, a mixture of the old and the new,” said Khryst. “Traci Lee hit me up in a DM, tellin’ me ‘Congratulations on being in one of the dopest markets of the world.’ That’s pretty cool.”