A lesson in LGBTQ+ history 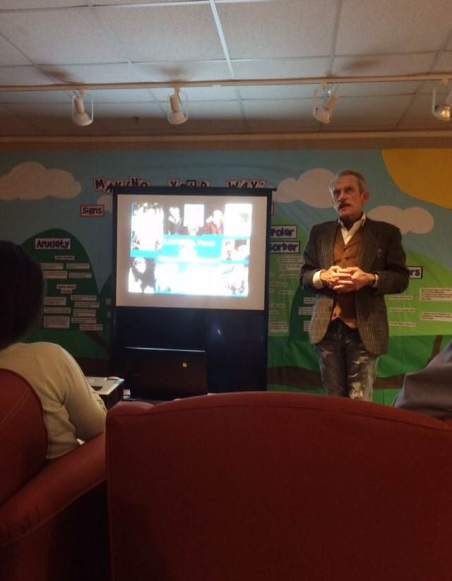 From 7-8 p.m. on Oct. 26, the Office of Intercultural Engagement and UNCG’s Queer Student Union hosted Dr. Jim Carmichael, for “A Lesson in LGBTQ+ History.”

Clad in a tweed suit jacket, a brown corduroy vest and a blue ascot, “A Lesson in LGBTQ+ History” speaker, Dr. Jim Carmichael, looked the academic that he is, and began his talk with a brief self-introduction.

Afterwards, he then asked audience members’ to introduce themselves as well.  Standing behind a projector with a slideshow featuring various LGBT faces throughout history, Carmichael chatted with attendants as each person introduced themselves by major.

At the beginning of Carmichael’s presentation, he recounted personal moments from his life, and said, “1969 to 73’; so, a lot of what I’m talking about tonight, is those years, because they seem to be the years where everything happened.”

Pointing to the slide show to begin, Carmichael said, “These people are some of my heroes, The Sisters of Perpetual Indulgence.”

He then went on to explain, that this flamboyant group of San Francisco State University students, were expelled for requesting that gayness and gay people be discussed in the California state curriculum, and later went on to do AIDS activism.

Carmichael then shifted to the next person, Ernestine Eckstein. Eckstein, Carmichael said, was one of the first women to have her picture on the cover of the journal of the Daughters of Blitis, which he said was, “The first lesbian organization; long before Stonewall.”

Frank Kameny, is the next person Carmichael discussed, who was a U.S astronomer fired during the McCarthy Era for being gay. “He spent the rest of his life,” Carmichael said, “challenging [the government]. He had become a lawyer, and challenged discrimination against government employees, and eventually, in 2009, he won.”

The next person Carmichael focused on was Barbara Gittings, who was, “An original member of the National Gay Task Force.”

Carmichael went on to say that Gittings was instrumental in the development of the national gay rights’ movement throughout the country, and was a person he knew personally and considered a friend. Carmichael also made additional mentions of Carmichael in later slides.

He then focused on Del Martin and her partner, Phyllis Lyon, who were, “The couple that sat in front of the San Francisco court house, who had been together for over 45 years and wanted to be married — who thought they were legally married — until they [California] reversed the decision [Prop. 8].” And, unfortunately, before the two could get married, Carmichael said, Lyon died.

On the subject of gay marriage, Carmichael pointed to new people on his slide; Michael McConnell and his partner, Jack Baker.

The marriage was quickly overturned, Carmichael said, and the two endured strife and homophobia as a result of their attempt to marry, but in 2014, he said, they finally got married.

Referencing the bibliography of novels he passed out at the beginning of the discussion about gay history, Carmichael then discussed the prevalence of gay relationships and gay life throughout history. This history, covered a myriad of celebrities and notable people from the 50s’ to the Victorian era, and he made a point to convey that, gay relationships have existed in different forms and contexts throughout history.

One period Carmichael spoke of, was gay life during the Harlem Renaissance.

Of the notable people of this period, he said, “Alain Locke, who was one of the philosophical architects of the Civil Rights Movement, and of course, Richard Nugent, who was a poet and author and, let’s not forget,” Carmichael emphasized, “Bayard Rustin, who was one of MLK’s closest advisors, and pretty much engineered the March on Washington.”

Throughout the rest of his presentation, in addition to discussing more historically significant gay people, Carmichael described his experiences as a gay man who participated in this history, and how that history shaped him and his LGBT friends.

And at the end of the presentation, Carmichael took questions — which primarily focused on his perspective regarding different aspects gay history — from audience members.

After answering questions, Carmichael had individual conversations with audience members, while attendants still present, debriefed the event with members of the Queer Student Union.