Home › Opinions › Columns › Cellphones in School: A Big Help or a Big Hindrance

Cellphones in School: A Big Help or a Big Hindrance 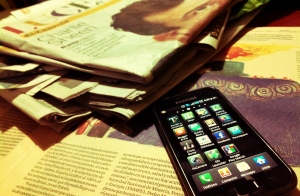 Many of us know how helpful cell phones can be. I know I couldn’t get to the store without my GPS, but is there a point when cellphones aren’t helpful anymore? Can they become hurtful?

Spending so much time student teaching in a high school made me learn many things; one of those being the honest reality of cellphones in the high school classroom. The number of times I have to tell students to put their phones away is astounding. They will put their phone in their open books to make it appear as if they are reading while they are actually texting.

As someone who considers themselves fairly attentive, I know what they are doing, but it is often frustrating to have to tell them to stop in the first place. They are well aware of what they are doing and why it is wrong, otherwise they would not try to hide it. It is ridiculous to completely discredit the positive aspects of technological advancements like cellphones, but it would also be ignorant to ignore the distraction it brings into the classroom.

The classroom is intended to be a place where students can leave all of their outside issues at the door. The purpose of coming into the classroom is for students to learn something and for me to teach them something, which becomes a difficult task to accomplish when you are constantly telling students to put their phones away. Often, the students are trying to sneak them in anyways.

That being said, cell phones can be incredibly useful. They function as a mode of communication, a dictionary, a clock, an encyclopedia, a GPS, a camera, an ebook, a notepad and a variety of other things.

Cellphones are often useful when students have no other way to acquire information and with a wealth of it available on the internet, why deny students the ability to access all that their cellphones can offer? So many times we have heard older generations harp on how cellphones are destroying the younger generations that have become so reliant on them, but there is no use in making future work harder to obtain the information we have made so easy for them to obtain.

I think the problem is not in the technology, but in the students who are using the technology. If students only used their cellphones when given permission and not during times when it is a distraction, they would be an incredible tool in the classroom. Teaching is a profession where people often fight change. Teachers often want to keep teaching the way they were taught as children, but in an ever-changing world, that is becoming more difficult. Many more experienced teachers fight cellphones, but I believe I believe it is our responsibility, as teachers, to teach students to be successful in this world of technology.

If students were taught to properly use technology in a respectful way and function in a respectful way in the classroom, education in our country would get a lot more accomplished. Teachers would be more successful, and students would be more successful. The only thing stopping us from this is our tendency, as educators, to avoid addressing things that may be difficult. It is easier to avoid cell phones than for us to learn to use them productively.

When there are apps out there like Pocket Points, we should be able to come up with ways to teach students to use phones productively. Pocket Points works by giving students rewards for not using their phones in class. The longer they stay off their phones, the more points they get.

Teachers could also try giving rewards for not using phones in class rather than always doling out punishments. Teachers could give rewards for students who are willing to turn in their phones before class on days when teachers do not want them being used.

There are so many things that can be done to create a classroom where cellphones are used in a productive way. With all of these resources, change should be more desired because technology will move on without us if we don’t change with it.