Reflecting on Anita Hill and Lesson of Sexual Harassment and Race 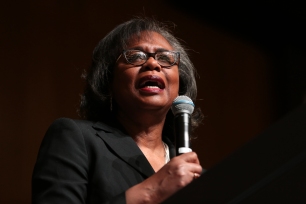 Born in 1940, Coleman said she remembered the events in 1991 very clearly. “I had witnessed at close range, and sometimes at a distance, some truly wicked, horrible human behavior by both the powerful and the powerless.”

In 1991, then President, George H.W. Bush, nominated Clarence Thomas to fill the position of Thurgood Marshall. There was very little opposition to Bush’s nomination, until an interview with the FBI was leaked to the press, in which Anita Hill alleged sexual misconduct against Thomas. The interview was strong enough to re-open the hearings and have Hill testify to the Senate Judiciary Committee.

During the hearing, Hill was hassled by the Senate Judiciary Committee, with Republican Senators, such as Orrin Hatch, saying that, “Hill was working in tandem with ‘slick lawyers’ and interest groups bent on destroying Thomas’ chances to join the court.”

The way the situation was handled in the hearings reflected how way the conversation was handled outside of court. “When the topic came up in public gatherings,” Coleman said, “conversations often ended with ‘we cannot lose this chance to keep a black seat in the Supreme Court.’”

Hunter concurred with Coleman, saying, “The tensions around Thomas/Hill within the black community did not center on the question of who do you believe … Rather the question was: ‘Should we sacrifice a black man’s seat on the Supreme Court, even a conservative one, because of it?’”

Hunter continued to explain that there were many “inter-racial sexual harassment and abuse” narratives at the time, but none adequately “addressed the unwanted sexual attention of black men toward black women.”

Anita Hill recalled moments of enduring Thomas’s testimony in her autobiography “Speaking Truth to Power,” which Green then spoke about.

Green provided context in which the harassment took place, beginning at the Office of Civil Rights in the Department of Education, Green said, where Thomas “pressured her ‘to see him socially,’” to which Hill temporarily stopped the harassment through reporting it to the Equal Employment Opportunity Commission (EEOC). The harassment unfortunately continued, Green said, as Thomas made “sexual comments and innuendoes” to Hill.

“She insists that readers not see her merely as a media subject, but as a person who has roots and origins,” Green said in her analysis of the autobiography.

Green continued, “Her parents and their parents were not educated folk, but poor people who worked hard…Yet, she is careful not to paint so sweet a picture, for her family experiences lynchings and racial violence.”

For Green, the dehumanization of Anita Hill was in direct correlation with how black women are viewed in politics, and related this to the #MeToo movement.

“#MeToo, a movement started by Tarana Burke, an African American woman,” Green said, “compels us to look back as we use new technologies to tell our stories. Some of us may never tell for fear of the kind of criticism and public harassment that Hill endured then and continues to…Yet, as we know; no protections were put into place to protect interns, staffers and even members of Congress from predators elected to office. For Anita Hill, who eventually left Oklahoma to rebuild her life elsewhere, she is now seen as the woman whose story shamed a nation.”