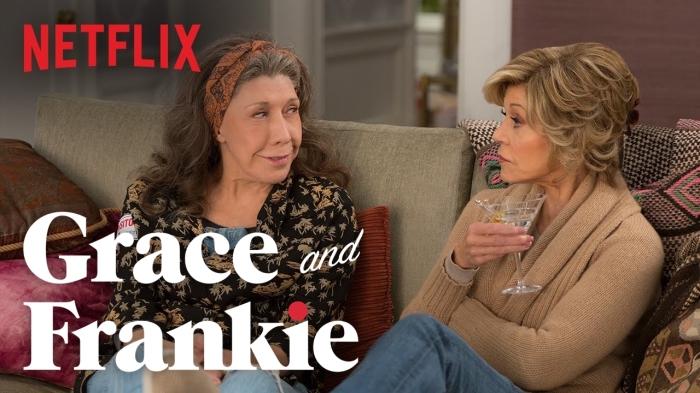 Since its premiere on May 8, 2015, the Netflix original series, “Grace and Frankie” has amassed a cult following.

Season one was largely defined by the shocking and humorous nature of its plot; Jane Fonda’s Grace Hanson and Lily Tomlin’s Frankie Bergstein are bound together through the discovery that their husbands, Robert and Sol, (Martin Sheen and Sam Waterston) are not only gay, but in love.

The humor in the first season of “Grace and Frankie” was shaped by its chaotic plot and contrast in personalities between the newly coupled Sol and Robert, and new housemates, Grace and Frankie.

The difference in tone between season three and four is markedly different. Instead of teasing out dramatic character tension between Grace and Frankie, the opening episode of season four rather nonchalantly opens with a look into the new and separate lives of Frankie and Grace. This separation does not last long, however, and the unlikely duo reunites at their formerly shared, California beach house.

Frankie, upon arrival from her new home in Santa Fe, is overtaken with jealousy after learning that Grace has found a new house mate to replace her on their lease.

When Frankie’s jealousy boils over, a fight ensues between the two. “My problem is that you erased me!” Frankie tells Grace.

To which Grace says, “I moved on, just like you did.”

“Well, the way you moved on was all wrong,” Frankie says in response.

The three are ultimately able to amicably sort out their living situation, and by episode two, “The Scavenger Hunt,” Frankie has decided to leave Santa Fe, and once again live with Grace in their California beach house.

What is striking about the bond between Grace and Frankie throughout the first few episodes of season four, is the profound growth each character has seen both individually and as a pair. While season one played up the differences between the two–Frankie the eccentric, Jewish hippy and Grace, the uptight, WASPy alcoholic–for comedic effect, season four emphasizes the similarities which have brought both women together.

No longer bound together by the awkward circumstance that their former husbands, Robert and Sol, have left them for one another, Grace and Frankie are living together because they want to. Grace even says to Frankie, after the two have decided to resume living together, “… I’m happy you’re coming home to me.”

The growth of the bond between the two is also exemplified in a conversation Sheree has with Grace and Frankie at the end of episode two.

“Do you two know how lucky you are to have each other?” Sheree says.

“I think we really do,” Grace says.

Sheree then says, “I had a lot of girlfriends in my life, but I’ve never had a Grace or Frankie.”

While not many moments to follow are quite as touching throughout the ensuing episodes of season four, it is nonetheless filled with moments of candor, humor and tension that marks “Grace and Frankie” as a unique and satisfying Netflix experience.

Fans of “Grace and Frankie” will be happy to hear that on Feb. 14, Variety.com’s Danielle Turchiano, reported that “Netflix has renewed ‘Grace and Frankie’ for a fifth season,” and that drag personality, RuPaul, is set to guest star on season five.

Like Loading...
‹ The Death of Print Media
Carol Cole and Using the Feminine Form to Emote Pain and Understanding ›