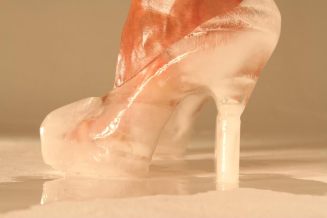 “Dread and Delight: Fairy Tales in an Anxious World” is an art exhibition that took place on Saturday, Aug. 25 from 5 p.m. to 7 p.m.. The exhibit was curated by Dr. Emily Stamey, who is Weatherspoon’s Curator of Exhibitions. She had the pleasure of presenting the debut of a contemporary spin on classical tales.

First, imagine some of your favorite childhood fairy tales crafted into a piece of artwork based on the perceptions of artists such as Natalie Frank, Carrie Mae Weems and Ericka Beckman.

Now imagine what it would be like to step into the art exhibition and be surrounded by images of Cinderella and Rapunzel. Well, many art lovers, including college students, did just that, visualizing another story in the ones they have known for so long.

Adults flooded onto the first floor of the Weatherspoon Museum, chatting amongst one another while indulging on hors d’oeuvres.

The chatter remained constant throughout the building, all the way up to the second floor where the main event took place. Although the main event was the actual art itself, some onlookers were dressed up for the special occasion while others wore eye-catching casual wear.

Walking around to different sections of the exhibition, some of the artwork displayed in picture frames were actual photographs, such as a modern take on “Red Riding Hood” with boys and girls in red capes, taken by artist Xaviera Simmons.

There were also ravishing drawings such as Natalie Frank’s “All Fur” made with blue, red and yellow colored chalk, which helped to portray the full effect of the importance of the piece.

Not only is the artwork important, but the details that inspired all of it are as well. Dr. Stamey explained that “We often dismiss fairy tales as merely children’s stories, but they were originally told by adults. They deal with many of the tough, real-world problems that we struggle with today.”

Dr. Stamey also had a huge impact on the selection of the pieces that were displayed.
“I selected all the artworks for the exhibition over the course of the past few years. As I made the selections, I was studying fairy tales broadly and fairy tale artworks specifically,” said Dr. Stamey. “Ultimately, I focused on just a few stories so that visitors to the museum can compare and contrast how different artists have explored each tale.”

Visitors were able to do just that with an out-of-the-ordinary but memorable portrayal of “Cinderella” by Ericka Beckman created in 1986. Her twenty-eight minute film consisted of bright colors, music and portions which resembled a video game.

Quite a few people stood around trying to make sense of the story they were seeing. It was very different from the original, but it had peculiar scenes within it that kept most of the crowd captivated until the final minute.

Taking in all of the artwork in such a short period of time was overwhelming, but the worth of that time spent was apparent to all who came out to the event.

If you are interested in seeing the exhibition, the exhibit will be at the Weatherspoon Museum until Dec. 9.

The artwork will later “travel to the Faulconer Gallery at Grinnell College in Iowa and the Akron Art Museum in Ohio,” as affirmed by Dr. Stamey. The artwork has a home currently among many wandering eyes, but will eventually be returned back to the artists.

Students and all who are interested in the idea of creativity should come on out and explore a new and exciting rendition on classical fairy tales.

Like Loading...
‹ Residents Of Fayetteville Speak To EPA Officials
Trump Attempts to Silence Critics With The Revocation of Security Clearance ›